The Hood County Maritime Response Team was formed in 2009 under Sheriff Roger Deeds. With Lake Granbury, the Brazos River, as well as many other private lakes, ponds, and stock tanks, the need for such a team was evident. The team completed its certification process in late 2009 and is now ready to respond to incidents in the county and to assist other agencies as needed. The team is made up of members of the Hood County sheriff's office.

According to the U.S. Centers for Disease Control and Prevention, drowning is the second leading cause of injury-related death among young children under the age of 15. In the average year, there are over 3,400 unintentional drownings in the United States - an average of nine people per day. According to the National Safety Council, an estimated 5,000 children under 14 are hospitalized due to unintentional drowning-related incidents each year, 15% die in the hospital, and as many as 20% suffer severe, permanent neurological disabilities. 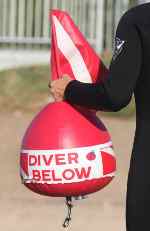 The goal of the Maritime Response Team is to greatly reduce the numbers and percentages in the above statistics. The team exists not only for water rescue and dive rescue, but to teach the public and our children about the awesome power and destructive capabilities of water, and how to avoid accidents and injuries in the water by taking preventative measures.